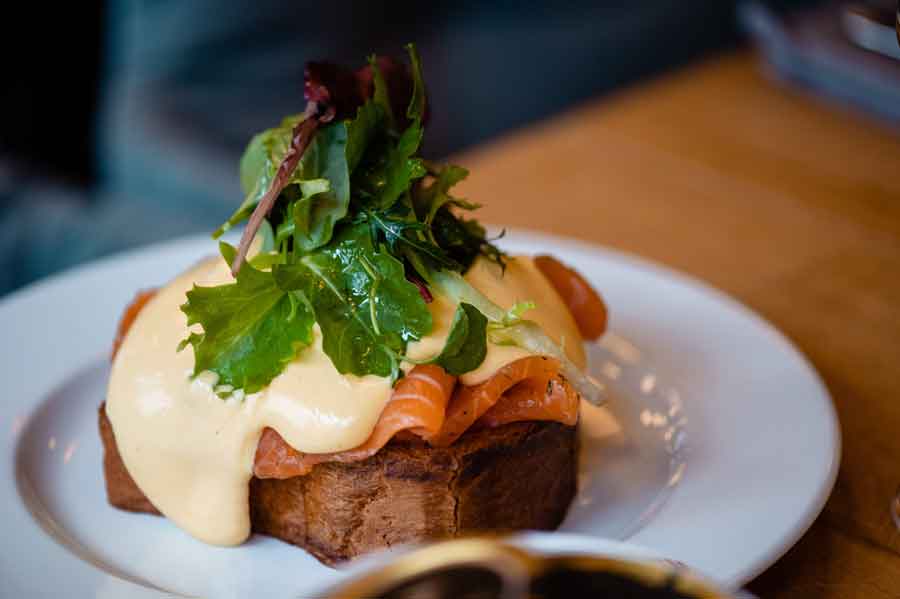 Eggs Benedict are becoming increasingly popular – they are the perfect add-on for a successful breakfast or an extended brunch together with family and friends. It is a recipe from the USA consisting of poached eggs, served on toast or English muffins, garnished with cooked ham or bacon and topped with hollandaise sauce. Also extremely popular in the UK, this dish is now common in many other countries. Major international hotels serve Eggs Benedict at their breakfasts. The dish is characterised not only by its intense flavour but also by its appealing appearance and looks good on any breakfast table.

The preparation of the dish is not difficult at all and can be prepared quickly even with a growling stomach before breakfast. For the perfect start to the day, the dish is the ideal companion, if only because of its rich and natural ingredients.

The preparation of Eggs Benedict is simple and you only need basic kitchen knowledge to make it. It takes about 25 minutes. The following ingredients are needed to prepare Eggs Benedict for two people:

First, bring water with vinegar to a boil in a saucepan, then simmer with reduced heat (approx. 80 degrees). For poached eggs, it is best to use eggs straight from the fridge. These are now beaten individually in a cup and quickly slid into the heated water. Using a spoon, carefully press the egg white against the yolk and coat it with the egg white. After about three miuntes, the egg white is set and the poached eggs can be lifted out of the pot with a ladle.

While the eggs are simmering, fry the bacon. To do this, heat a frying pan and fry the bacon until hot on both sides.

Toast the slices of toast in a toaster, setting the appropriate toasting level according to your preference.

Cut the fresh chives into small rolls. Now comes the best part of the recipe, the serving. Simply arrange a slice of toasted toast on a plate and top with the bacon. Place the poached egg on top. Pour a little hollandaise sauce on top and finally sprinkle with the chive rolls. Enjoy your meal!

This dish is a complete meal with all the nutrients you need. The following nutritional values are found per portion:

-If you want to expand or vary your recipe, you have several options to choose from. You will find several variations that you can add to your recipe as you wish.

-For the “Egg Blackstone” recipe, tomatoes are added and streaky bacon is used instead of cooked ham.

-For fans of fish, “Eggs Atlantic” or “Eggs Hemingway” or “Eggs Royale” is just right. Salmon or smoked salmon is used instead of ham.

-Fans of vegetarian cuisine may prefer the “Eggs Florentine” variant, which uses spinach instead of ham.

-The “Egg Sardou” version is also excellent for vegetarians. Artichokes and spinach leaves are used instead of ham.

-Equally good as a vegetarian option are the “Huevos Benedict“, which uses avocado instead of ham, plus a salsa.

-Egg Hussarde uses rusks instead of toast or English muffins and sauce bordelaise instead of hollandaise sauce.

-A special variation is the “Egg Beauregard” or “Country Benedict“, where biscuits are used instead of toast or English muffins and a hamburger patty is used together with country gravy, a special sauce from the southern states of the US.

Origins of the dish

As with many other recipes, there are two different versions of how Eggs Benedict came to be. In 1894, the stockbroker Lemuel Benedict is said to have ordered this dish in the renowned Waldorf Astoria Hotel in New York as a hangover breakfast after a night of drinking, and it was subsequently named after him.

The second story is also said to have happened in New York: The chef Charles Ranhofer of the restaurant “Delmonico” is said to have invented the recipe especially for the demanding guest, financier LeGrand Benedict, and included it in his cookbook “The Epicurean”. The latter had complained to him that the breakfast menu was always the same. So the chef came up with this delicious recipe to counter this claim.